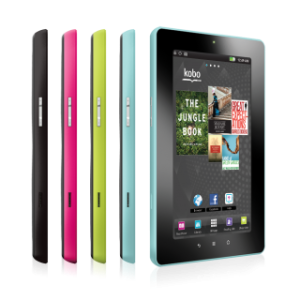 Reporting in from the fringes of the e-reader war, I find myself inclined to touch on an interesting change that is happening abroad, tiptoeing stealthily beneath the cloud of buzz surrounding the launch of the new Amazon and NOOK tablets. It was recently announced that Kobo, the Toronto-based global digital book retailer, was purchased by the Japanese company Rakuten Inc. for $315 million.

While the industry empires sharpen their knives, haul up their sails and ready their cannons –all in preparation for this year’s battle to win over holiday shoppers, I begin to wonder about the timing of this foreign rival. More importantly, however, is how this changes the nature of the competition. What will happen now that there’s a ninja in this pirate game? (I apologize, but someone had to say it …)

While control of the American e-book readership seems to be confidently in the hands of Amazon and BNN, it may only be a matter of time before Kobo’s new owners step up their game. One glance at the numbers shows that Kobo, with Rakuten behind it, has the potential to be a strong contender in a market dominated by Kindles and NOOKs.

“Kobo is the third player in a two-team market,” said Allen Weiner, a Gartner Inc. analyst in an interview with the Wall Street Journal. (You can read the full article here)

Kobo Chief Executive Michael Serbinis said on a conference call Tuesday that Kobo enjoyed about 50% of the e-reader market in Canada. Its share in the U.S. has fluctuated from “the high single digits to low double digits,” he said. The Kobo has recently launched in Germany and the U.K., and has plans to roll out soon in France and elsewhere.

Now Rakuten, while virtually unknown in the United States, is not a small, energetic startup. It is Japan’s leading Internet retailer, a sprawling international corporation with holdings in travel, banking, media, online marketing, securities, and telecommunication. It has expanded its e-commerce operations beyond Japan and into Brazil, Thailand, Indonesia, Taiwan, and…you guessed it…China.

“This is not a one-country game,” Mr. Serbinis said in a phone interview [with WSJ]. “Two-thirds of the book market is outside North America. We’re going into countries where we will be No. 1.”

Furthermore, Rakuten is positioning itself as one of Amazon’s main competitors in the international arena, not only as an economic rival but as a staunch critic of Amazon’s business philosophy:

“Everyone is very afraid of Amazon, publishers and retailers,” Hiroshi Mikitani, the chairman and CEO of Rakuten, said in an interview [with WSJ]. “We are more of an alliance-oriented company than Amazon. We want to establish relationships with retailers, rather than seeing one company dominating everything.”

This entry was posted on November 9, 2011 by Jenka Eusebio in Business, Culture, Technology and tagged amazon, japan, kobo, rakuten, vox.